On 27.01.11 I was on a rail replacement bus from Haywards Heath to Three Bridges. At 13.25 according to the enbedded info in the jpeg file I took this photograph from the upper deck. 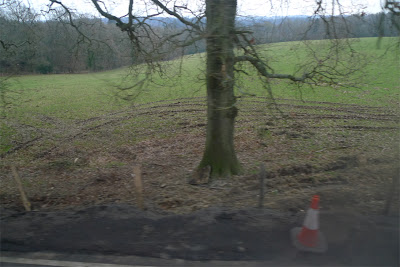 I was trying to take a row of traffic cones but ended up with one due to the delay with focusing and metering. As it transpired my picture was taken from almost the same point as the one taken by the Streetview car - at the same node.

The traffic cones were a temporal event in the scene that provided a kind of reference between the world and Streetview. Would the cones be there in Streetview when I checked later so that these transient monuments might atain a degree of permanence?

A photograph once had a more or less indexical relation to the world with an image being a frozen moment of a mostly unrecoverable reality. The world extends away in all directions and is capable of being traversed and returned to. A photograph cannot be physically entered and essentially remains materially unchanged on subsequent visits. It exists within the world.

Streetview is a special case of panoramic photograph that gives the illusion of being entered and traversed.

Since Streetview neither the photograph or the world can exist, either independently or with relation to one another. The indiscriminate nature of the image harvest and the extensivity of the  project approximates to the world to the extent of being a form of reality to be entered. Now the world is no longer the sole signified and the landscape photograph only exists after Streetview as secondary deja vu phantom. A photograph is no longer the repository of memory but a portal between two worlds that can both be visited, moved through, traced and compared. A sense of a slow elision of real and virtual starts to take hold. Representation's other terms are now storage, search and retrieval, the simulacrum's rider. Applications that match Facebook profile pictures or search for the title of music tracks presage a moment where you can point your camera phone at the presented scene and ask 'where am I?'

"Noon-day sunshine cinema-ized the site, turning the bridge and the river into an overexposed picture. Photographing it with my instamatic 400 was like photographing a photograph. The sun became a monstrous light-bulb that projected a detatched series of "stills" through my Instamatic into my eye. When I walked on the bridge it was like walking on an enormous photograph that was made of wood and steel, and underneath the river existed as an enormous movie film that showed nothing but a continuous blank."

A director scouting locations for a film already made. The landscape with traffic cone exists in a new temporality - the traversable past. I travel in Streetview within the latest update. I visit the place where a photo was taken of a traffic cone in the way I might return to the tree along the London Road near Balcombe but in a perpetually out of date present.

Some works have occasioned the destruction of the fledgeling hedge and the cones no doubt are warning of the hazard. The fate of sheep visible from the satellite picture is unknown. Search online to find the owner of the field and the story of the sheep. A collating algorithm app will assemble all this information which will be projected through Google goggles directly onto my eyeball. Every glance will engender data. This will be tradable. Others will hack into the cameras in my eyepiece and view everything I see or distort it for their own purpose. 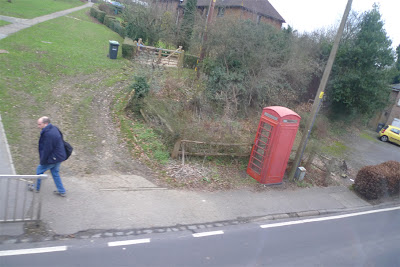 Two more images from the same journey. The man captured in my photographis no longer walking in the world. He oscillates between two topographies like a photon neither here nor there until observed. A fence will always be falling into disrepair. A tree can be potentially gone. A new gate never appears. Lines on the road have changed dot dot dot . A wheelie bin was abducted by aliens as a refuge. Winter came.