The plummet from a satellite image into a prisitine landscape. The body has taken the form of a yellow figure standing on a green pointer. The man who fell to land's end.

There may be evidence that country smells might once have existed - flowers or the smell of manure. What blooms in the hedgerows of Streetview? The left fork beckons and the landscape blurs between each hyperlink.

The car that was ahead has vanished and more horses have appeared in the field a sign possibly of mysteron activity. A lovely sunny day and  flowers blooming in the verge.  A pink interloper marked with an A. A potential starting marker ready to burst with seeds of information that would have already determined a potential B. 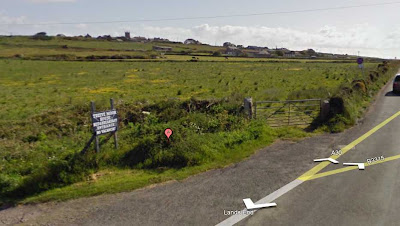 A totem guards what appears to be convincing piles of horse shit in the field. I can't quite shift position in streetview to get the clear plane of the field behind the subject instead of the horse's arse. but maybe an engine of country smells and its guardian should be conjoined

Sentinals are placed along the entire field. They are silent and no rollover springs up when the cursor passes them. They retain their secrets - black holes of data.

Passing the mobile home site I am reminded of the book Red Shift where the main characters are trapped in time loops forever replaying variations of their own histories.


Looking back from the Sea View holiday park the sea is a blue signal from itself squeezed between the sky and distant fields.

Sennen and the First and Last Inn gets in the spirit of the quantum zeitgeist. I fire off an email in the hope of some interaction.

a couple of so called artist types are passing your way over the next few days imagining ourselves as a kind of withnail and i combo. we are generally harmless but wondered what kind of welcome to expect? lurid images of werewolves or homicidal villagers gleaned from films crowd our minds and to be honest we would probably prefer brusque than anything mary portas might endorse. not that we are lacking in courtesy or civilised ways ourselves. we are also taken by the heavenly overtones of the pub's name he who shall be last shall be first and vice versa as the good book says. let's hope that doesn't refer to getting served (just kidding)! we're fans of live music and lively conversation.

in google streetview there are a couple of shady characters in high vis (if that is possible) walking by the side of the pub and we wondered who they might be.

But no reply not too surprisingly. As is somehow to be expected the sign is different depending on which way you approach it. 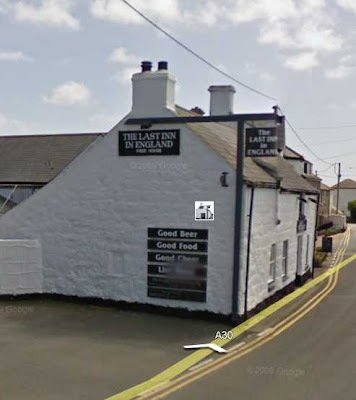 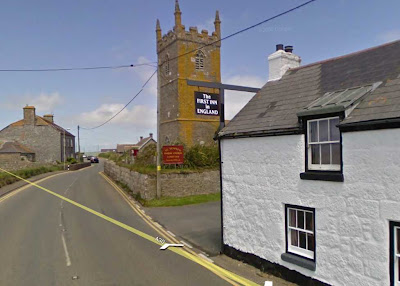 Unexpectedly the First and Last pub sign is on the event horizon of two stitched panoramas - a kind of Streetview joke - and is beginning to vanish like the fading smile of a Cheshire cat. Two reality bureaucrats enter from another world with compact monitoring equipment.