Seems the First and Last Inn is proving difficult to leave so this journey will continue as a pub conversation.

An associate I know (Mocksim) was in Arles which is where I mistakenly thought Van Gogh died. I asked him to take a picture of a sign that I had once seen in a documentary placed in the field whereVan Gogh shot himself . A little research and it turns out that Van Gogh died in Auvers sur L'Oise which is north of Paris so I went trawling in Streetview for images. I found this video on Youtube: http://www.youtube.com/watch?v=9yWEDFdddXs a walk through the fields to the place. Streetview can't go there but some images have been posted of which this is one. The sign depicts a painting presumably where it was made and perhaps  where Van Gogh shot himself. 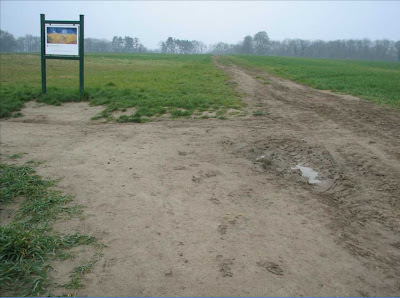 The path followed in the video is very clear in the satellite picture and the particular tree in the video can be referenced with the ones taken from the satellite. It's even possible to see the sign with the patch of earth worn bare by the feet of visitors. At one point the video pans to the right and it is possible to see the cemetary where Van Gogh and his brother are buried, a corner of a foreign field that is for ever The Netherlands. 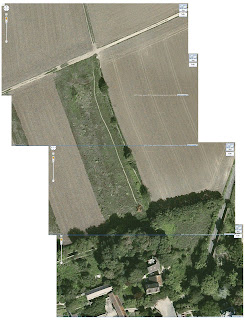 The sign can be seen in Streetview from the road near the cemetary looking towards trees that I imagine contain a rookery where the crows nest.

However the sign in the field isn't unique and they are scattered about Auvers each at a spot where a painting was made.These can be seen in Streetview either directly as below or in photos uploaded. 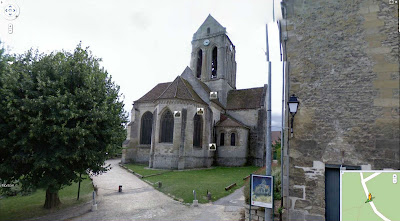 Here is one at the church.

There is a striking correlation of virtualities between a town imaging itself so thoroughly through paintings and its presence in Streetview. In the same way as the world can now only exist in reference to Streetview, Auvers can only be seen through a set of temporal and spatial displacements between the absent paintings and the restoration to their site of origin through these signs. There is something Ballardian and chilling in their totalising vision being so widely cast in real space. A church clock stuck at ten to three morphs into a reproduction of a whirling eye from the nineteenth century. The painting itself in Paris spawns a penumbra of fridge magnets, mugs and tea towels that swarm north to the town. In Auvers the whole place is in danger of foundering in time through these shuddering portals. The sense of otherness engendered by the art object collapses and its hard won relationship with the world is betrayed. The only redemption now is an app (http://www.guardian.co.uk/media/2011/jul/06/afghanistan-war-iphone-images?INTCMP=SRCH) that will turn your photos into Van Goghs.
These guys have the right idea http://www.treehugger.com/files/2011/06/vertical-wall-van-gogh.php.

I HAVE NEVER BEEN TO AUVERS

I HAVE NEVER BEEN TO ST JUST

The floors creak here in The First and Last Inn and I try to wake from that dream of being trapped in fishing nets and a rising night tide. The phantom of Annie George breathes her memories into the heads of sleepers.
http://www.firstandlastinn.co.uk/history.html