I did a search on Youtube to see if there were any videos of the Streetview car and sure enough there was quite a crop. Seth38101 picks the car up at where Point Drive meets the US 220. He prefaces his shot of the car with an anecdote about having recently blogged his desire to be a Streetview driver and his weird luck at actually having encountered the cat itself http://www.youtube.com/watch?v=gv_tHubgYY0. The first view in the video of the Google car is shot here (38.958297,-79.159091) in the scene below.

The Google car is following a car transporter and this three vehicle convoy continues up the road for a while with Seth38101 keeping his distance so as not to spoil the Streetview shots, he says. He muses that he might flag down the driver and ask him how he got the job but notices his fuel is getting low and overtakes and parks up ahead at the Bethel Church of the Brethren http://bethelchurchofthebrethren.com/. There he gets his final shots of the transporter and Google car as they pass. He also includes the sign outside the church that is visible in Streetview and in a legible version on the church website.

The Streetview camera freezes in a series of panoramas the moment when the red Jeep (which appears in another of Seth38101’s videos) overtakes the Google car and its final appearance further up the road outside the church.

The video is a real time version of the event albeit with edits. The relative quality of the images from the video shot on an iPhone and the Streetview camera hold some fascination but the viewer may also jump from node to node in Streetview comparing scenes to the video knowing that both are a simultaneous record of the day. The video is zoomed in which compresses the space while the Streetview camera is a wide angle composite. Here sunlight flashes off the screen of an oncoming car in both Streetview and Seth's video: 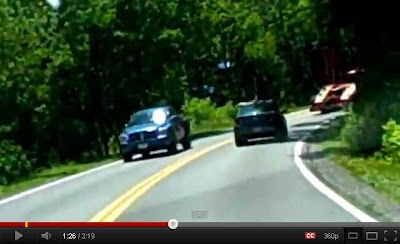 Here some glitch in Streetview causes a blue stripe to become part of the visual experience:

Each panoramic node of Streetview is experienced in real time as the viewer pans around it. In terms of the events of this narrative, travelling north up the US220 will take the viewer back in time to a point before the red jeep comes into view. From each node one can pan about within the span of their journey together to see the car transporter in front and Seth38101’s Jeep following behind.

As Youtube are owned by Google, all these experiences come courtesy of their corporate beneficence. Encountering the Google car confers the possibility that your image will be transposed from the sub-lunary world to Streetview (until the next update) to partake of a form of ecstatic electronic fame within a panorama or panoramas viewable by millions if you aren't comletely blurred out and edited.

Google hosts the viewer recording their survey in an economy of mirrored surveillance and fervent mutual promotion. It is worth noting that, until recently, it is the car that determines the scope of the survey with the user of Streetview as a special case of passenger, the computer monitor standing in for the windscreen and the engagement with the environment being as distanced as the occupant of a car. Movement between the Streetview panoramas remains as jerky as a learner driver but without the same danger of collision. Now tricycles are used instead, extending the possibilities beyond the street.
This video shows the Strretview car with its camera hooded
http://www.youtube.com/watch?v=1i1G2iIwNjs and by posting the video the filmmaker becomes Google information without the camera having actually filmed them.
Two videos that attest to the compelling allure of the Streetview world.
http://www.youtube.com/watch?v=V7I2X1M9u9E
http://www.youtube.com/watch?v=vijReRuboF4
Baudrillard’s essay on the ecstasy of communication:
http://199.91.152.155/b9t87b6lxxgg/1kgz54acgn0u2km/Baudrillard+Ecstasy+of+Communication.pdf

I found the video on Youtube and noticed the sign marked 220 that I assumed was the road number. Seth38101's location is on his Youtube channel and it only took a few minutes to find the church with his red 4x4 parked outside, the same vehicle that he had described in the introduction video to his new house. That felt as thrilling as any more meaningful investigation and I think that thrilll has something to do with the compelling power that the blanket representation of Streetview offers, the sense of the world being valorised by an impartial authority. The query I had posited was closed by this recripocal evidence. There is something here of the compulsion to visit film locations or even archaeological sites - to be at the site of a mythic occurance. Streetview engenders surveillance, tracking, and detection narratives.

In this case I was witnessing too the charm of the reciprocal gaze, from the vicarious pleasure of pursuing the Google car through Seth38101's video to the irrefutable objectivity of the presentation of his jeep and further up the road the car transporter by the Google camera. From slight clues it was possible to ascertain from my desk the location of that particular video event which itself is a powerful capability. It is similarly possible to view in Streetview, for example, the exact spot where the couple in the "Vancouver Kiss" photo were located from the information in the photograph and from two videos posted on Youtube shot from a carpark above the riot.

I located the church but my firewall closed my browser window and it took a further 3/4 of an hour torediscover it.

The church site quotes from I Corinthians 13:1