The border of an image I had downloaded contains the information Untitled (Cerritos, CA) 24x30 inches 2006. 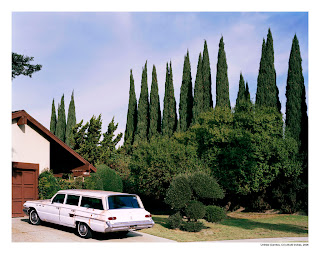 The photo made a single web appearance and is not included on the photographer's site. They are quite distinctive trees so I paid a visit to Cerritos in Google Satellite and was lucky enough to spot them fairly quickly. They screen off what appears to be a single track railway.

The photo is dated 2006. In Streetview (which didn't start until 2007) the same clapped-out car still occupies the driveway, through which we can infer that the owner rarely uses his garage and hadn't updated to a more recent model.

A fascination with film locations attracts fans as though they might recover something of the mythic world of cinema from the actual site extends to photography where you might want to visit the location represented in an iconic image.  Because Google's automated image gathering is indiscriminate and the encompassing image is traversable it assumes the aura of a reality itself. The photographic moment is preceded and succeeded by the Streetview panorama. The reality principle is absorbed into an encompassing and compelling panoramic simulation that adds another layer to the construct of a landscape photograph.Through this technology the viewer is constituted as a stalker or detective in an attempt to puncture the fiction of the photograph and regain the referent lurking within - only to discover another level of representation.

This assumption of reality is the rehearsal for extending the corporate project even further into every aspect of space and the fabric of the world. With nanotechnology this penetration could link with GPS to cocacola-ise everything from the atomic scale upwards. When Jordan Crandall talks about cinema as a form of tracking,  landscape photography as an act of collusion with the new total surveillance technologies courtesy of Google becomes eerily apparant. Recently the fugitive John McAfee was tracked to his Guatemalan hideaway by information encoded in an  Jpeg uploaded onto the Web.

Their work raises interesting questions about the photographer and their relation to subject and audience, a point acknowledged by Doug Rickard whose project A New American Picture tips a nod to Robert Frank's book The Americans. Sitting at his computer and trawling Streetview for dystopic American scenes he cites Bresson's decisive moment as being instrumental to his method where his images are a conscious mythic construct achieved by singular framing and editing, an aesthetic layering that takes the work away from documetary https://vimeo.com/30357393. He prefers the older less sharp images of the older Streetview cameras and excludes any of the onscreen tool icons. His work consciously addresses the power of photography to form mythic images. Streetview itself, due to its ongoing updates, has the means to deconstruct this formula. In this updated image American Collision is getting a makeover. 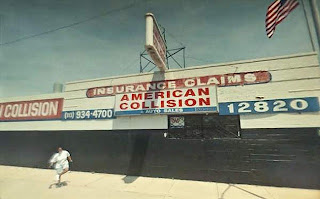 Here it is fairly easy to track the image through a web search of the name of the business.

Google, for reasons best known to themselves, aren't above doing their own editing. 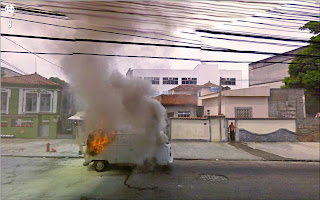 This image captured by Jon Rafman has been subsequently blurred from all angles. 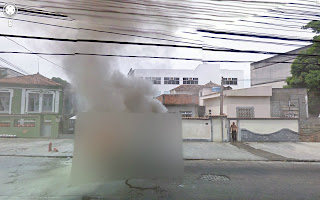 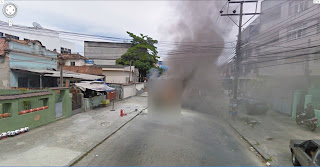 The gritty scene of urban decline and the implied violence of a torched vehicle is suspended within a wider context that speaks of a safer environment than the one suggested. It is the Google car itself, which has to mount the pavement to get by the traffic backed up behind the burning camper and again to pass the fire truck attending the blaze, that is the only lawless element here. 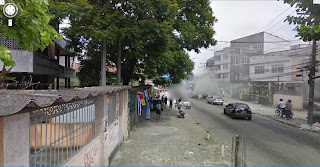 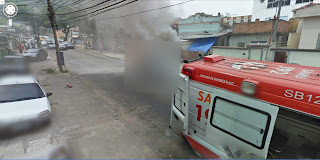 I found another blurred out element as I was noding (panorama hopping in Streetview) around the London Olympic site.

Another example of editing is the complete removal of an panorama or a series of panoramas that offends the Google sense of propriety, such as dead animals and people. In this case the only drama is of the camera finding itself among the branches of an overhanging tree. Now only a vestigal branch suspended in space remains from that event.