Streetview is Google’s expansion of mapping into panoramas that can be viewed as an on-screen image. The fascination of a satellite picture, which is half way between a photograph and a map, is extended into an immersive image captured at a specific GPS location that can be panned around and traversed through to another precise viewpoint through pop-up navigation tools. The quality of being able to journey within a map is reminiscent of Baudrillard’s metaphor for Simulation that he took from Borges’ Story On Exactitutde in Science where the map has the same scale as the territory. The difference is that now the territory will track the voyager.

Digital photography and screen capture share the same binary code. The computer screen stands in for the screen on a digital camera. Streetview introduces a new dimension to landscape photography in that any landscape photograph is now preceded by a Streetview panorama. The aesthetic aspects of a landscape photograph have in addition the function of mapping and surveillance. Streetview itself is now being used as a source of images that are variously street photography, landscapes and social documents, which speak more of the underlying narratives that underpin the creation and reception of an image rather than any reference to a social reality.

Streetview is not a seamless representation. Glitches interrupt the uniformity of the image. Often the stitching of the images is misaligned or overlapped. there is an area at the bottom of the image close to the camera vehicle where the subject can appear distorted or blurred and unjoined from a more clearly photographed part of itself. 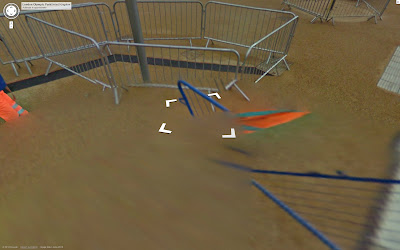 People have their faces blurred out or are smeared across the screen or are stitched together as misaligned smudged and focussed fragments. 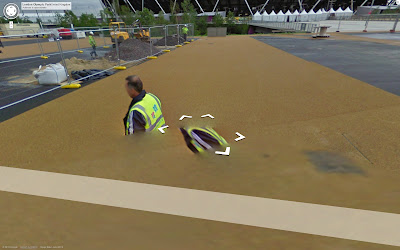 There is a sense of veracity in an image that lacks the unity and authority of a conventional photograph bringing it closer to our collaged cognition. The Streetview image is replete with the trace of the user in the form of layered information that responds to the movement of a pointing device but also registers their position to the data miners. 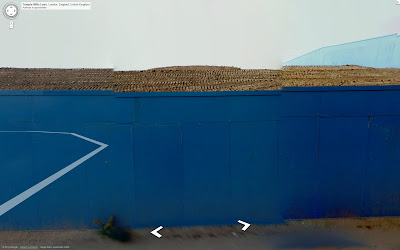 Unlike a multi-user virtual world, you cannot interact with other visitors to Streetview. Instead users can upload their photos at the position on the map they were taken. These images spring into the view as the mouse rolls over their thumbnail and can be included in the screen capture. The stitching algorithm attempts to join these pop-outs into the scene resulting in distortions of the image that resemble the irregular geometries of constructivist paintings. 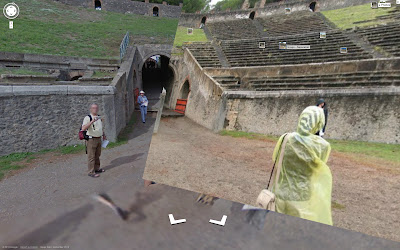 The internet is a global theatre where the distinction between actor and audience is blurred. I have used a selection of stadia available on Streetview as metaphoric sites to explore the position of the producer/spectator in a global digital age. http://public.fotki.com/mikestoakes/stadia/
The genesis of the stadium is as a spectral instrument of fascination and control.

The London Olympic site was mapped for Streetview while still under construction.Workers in safety hats and hi-vis vests are part of the scene as they are in the Colosseum and other sites around Pompei. 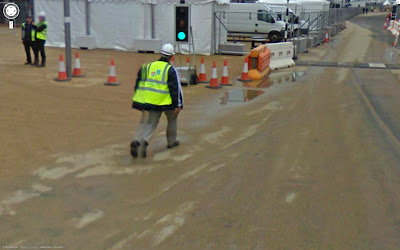 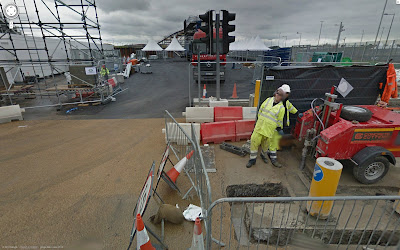 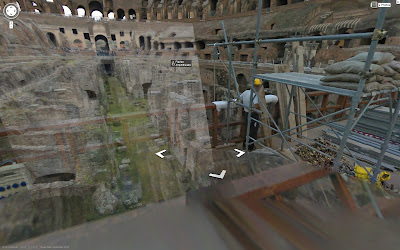 In the Berlin Olympic stadium the Streetview camera photographs itself on the huge digital screens that are now customary stadium furniture. 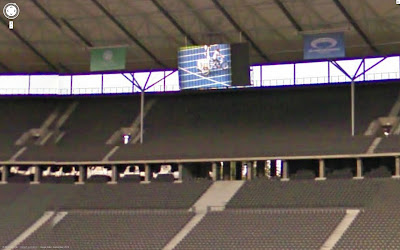 The Olympic park is a tightly secured space accessable on screen whether through Streetview or television coverage of sports events. 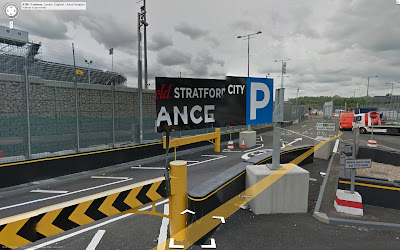 Since writing the above a recent article has given a fantastic insight into the impetus for Streetview: http://www.guardian.co.uk/technology/2012/aug/28/google-apple-digital-mapping
A couple of years beforehand, Google co-founders Larry Page and Sergey Brin had been fascinated by the zooming satellite imagery used by US news networks to report on bombing raids in Iraq. Those terrain graphics were provided by Keyhole, Inc, a software company that the CIA had helped to fund. Unlike the rest of us, Page and Brin had the wherewithal to act upon their fascination: they bought Keyhole, repackaging and releasing the firm's software as Google Earth in 2005. "They say they bought it because it looked cool," says Brotton. "But my view is that they absolutely knew what they were buying. They marketed it in this touchy-feely way, as an environmental thing, and they called it 'Earth' – 'Google World' would have sounded imperialist. But they knew that what they were getting with Keyhole would be integral to the search business."


After 3,500 years of city mapping, we have arrived at a point of zero abstraction, at a point where the true representation of the earth appears on our monitors and is updated continuously, quickly and with ever-sharper images. Google Street View, the most advanced level of the city representation, makes it possible to dive into the map and even become a part of it. Eventually the map will become the entrance gate to the online world. It already lends access to websites and, in the case of museums, to entire buildings and exhibitions. Through the map, real space will ultimately merge with virtual space. The map of real space will guide us through the World Wide Web while the virtual map guides us through the real world. Holding the key is the owner of the map, who possesses the access code to both worlds.