figures in a landscape


The trend in recent photography of “mining” Google Street View for images that have the appearance of social documentary has recently been extended by Mishka Hanner’s wryly titled project No mans land of women apparently soliciting for sex on the streets and motorway feeds of Spain and Italy http://issuu.com/mishkahenner/docs/noman_sland-web. While Doug Rickard’s similar project A new American picture focused on the visual texture of urban decay, No man’s  land appears to depict a very real social and political issue. In these projects the act of framing is critical. While Doug Rickard riffs off the aesthetic of deprivation and alienation of Robert Frank’s iconic The Americans, Mishka Henner is more focused on the image’s production and reception. No mans land could refer to the source of the images from the image banks of Google’s digital storage, or the liminal places that these prostitutes utilise, or as an ironic reference to a world traversed by and existing for men to whom, however, the full scope of the relationship remains largely opaque. In fact the glimpses through Street View of these women caught by the camera gives a greater impression of revealing the life behind the display. It is this aspect of exactly what truth a photographic or digital photographic image is able to convey that seems to be at the heart of this project.

The pictures show women who appear to be working as street prostitutes, though this cannot be firmly established due to the automatic nature of the image gathering and its distance from its subject. Henner has been cited as sourcing these Street View images from forums where men share knowledge about the location of prostitutes such as doxyspotting.com. The activities of street sex workers and the Street View project combine in a Ballardian technological collision. The sex workers typically position themselves by roads where they display themselves to motorists so the car is central to their strategy, while the car mounted camera is the primary mode of acquiring images for the Street View project. 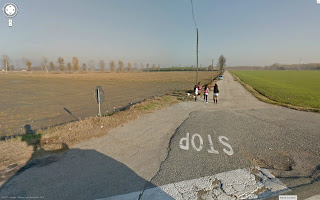 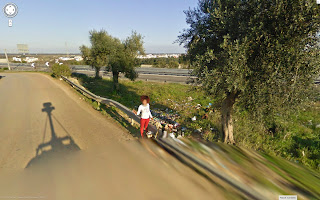 Henner selects the images with a preference for women in remote locations and presents the viewer with beautifully composed images with the traces of their origins such as Street View’s navigation tools excised. The work is available as a book and editions of six 20 x 24 inch prints. The exhibition was accompanied by ambient sounds and this temporal element is extended by videos in which Street View is animated by selecting still frames from successive panoramas that will approximate movement along the road, returning motion to Google's otherwise static panoramas. This process is akin to flying a virtual camera along a path in CGI. As viewers we appear to be approaching the subject in a car.  The technique allows Henner to pan towards the woman as the car passes in a creepy way that parallels the viewer’s interest in the subject and the subject presented as work in the context of a commercial gallery. This sense of prurient complicity is furthered by the titles that give approximate locations of these prostitutes. The connection between prostitution and image making has a long history as though the display and illusion created by women to fulfil men’s sexual fantasies has a metaphoric parallel in the virtual life of the image.

Doxyspotting.com is a site similar to googlesightseeing.com where contributors can upload images of unusual or intriguing events captured by the Street View camera the difference being that doxyspotting.com is specifically devoted to prostitution and the location of prostitutes. Something this site conveys that No man’s land only hints at is the sheer scale of the activity, with thousands of images uploaded. Both projects obliquely share the problematic relationship with surveillance that Street View mapping and the data acquisition of Google raises. As with No man’s land the viewer of doxyspotting.com can’t determine whether all the women displayed are sex workers, though the assumption might be that contributors have first-hand knowledge. Henner mimics the sense of sleuthery this site revels in by including the paraphernalia of abandoned chairs, parasols and water bottles that serve as clues to a prostitute’s whereabouts when the woman is absent. The plastic garden chair is almost a symbol for the trade. Quite often the women are surrounded by litter which adds to the sense of people discarded like waste and perhaps this abjection is part of the allure, literally shifting desire beyond its normal social limits. If there were any doubts about where these trysts are enacted a location posted on doxyspotting.com shows an abandoned mattress on rubbish strewn verge right by the road. 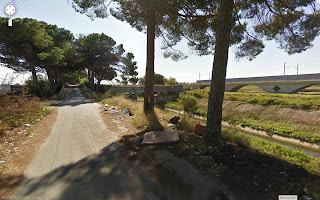 As might be expected, contributors to doxyspotting.com provide commentaries with their images that range from the descriptive to the exploitative. Henner provides enough images to give a sense of the momentum that seeking out images, recording them as photographs and collecting them engenders and where this pursuit, as seems to be the case doxyspotting.com, becomes an end in itself.

Street View has provided Henner with a useful way of examining the power structures and modes of reception of the photographic image where the viewer is constructed as a consumer. The viewer has the option of seeking out the source of the image in Street View and making their own version if the fancy takes them. They can jump between adjacent panoramas and frame their own image as they please or merely revisit a location in the way a fan of Constable might visit Flatford Mill. In one instance (through doxyspotting.com) I discovered that an image of Henner's purporting to be in Rome was in Sicily. As Street View is primarily a mapping project, images that have too much social baggage or resonance are frequently removed or replaced or blurred out. In several instances the panorama that Henner and doxyspotting.com derived an image from was taken down, though the subject still appeared in the adjoining panoramas.

The street sex trade is so extensive that updating or removing one image of women means that it is often replaced with another. This critical editing by Google is at odds with the promiscuous way with which the images are obtained - the continuous encompassing capture  that gives Street View the sense of being a complete reality. In some areas the viewer travels through the panoramas down a road through different periods of time encountering new images of women with each transition. As is its usual practice, Google blurs the faces of these women to hide their identity but the effect in this case and in the case of Henner’s work is to create an even greater gulf between the viewer and the subject and to highlight the shortcomings of the photograph as a conveyor of social or emotional truth. This is consistent with his other recent project Less Americains. Thus these women’s identity is projected solely through the clothes of their trade. The women themselves are from many different countries and their  presence in these situations point to a massive wider economy of migrating and trafficked people. They emerge but also at times seem to be absorbed into the landscape within temporary shelters they have constructed or the protection of wooded bowers. The blurred and eradicated face is eloquent of the fact that one voice is persistently and clamorously absent - that of the women themselves.

Mishka Hanner is a nominee for the Deutsche Börse Photography Prize.