While journeying through British Columbia in 1989, my family pulled off the highway into a town called Hope for breakfast. I picked up a publication entitled Hope Daytrippers' Paradise produced by the local Chamber of Commerce which contained snippets of local history and articles on local attractions. However a large proportion of the magazine was given over to what was described on the cover as a "Free souvenir Rambo pullout" which celebrated the transformation of the town into the set for the film First Blood. The streetmap of the town was placed inside this pullout and contained numbered references for a guided tour of Rambo locations.

I found it surprising at the time that a town with an interesting enough history of mining and the site of the first library and church on mainland BC should devote such a large proportion of its self promotion to what I regarded as a mediocre film. However in true Rambo style I defied my father's wishes and abandoned my family in order to track down some of the sites in the guide and especially the iconic girder bridge on the edge of town (which appeared on the cover of the brochure) where Rambo is driven out of town by the sheriff.

Years later while reading for my MA I came across a Hitchcock site that had a comment describing a visit to the church used in Vertigo. It was the sense of reverence the writer had touching the same door handle that James Stewart had touched in the film that made me realise just what a compelling link there is between narrative, myth and place. The experience of place gives the impression to the reader or viewer that they may access the fiction more completely through their bodily presence at the actual location. Settings for films, books and paintings and historic sites all exert the same compulsion as visits to Salzburg for the Sound of Music locations demonstrate and have done so historically as with the Roman sightseeing tours of Troy. This is the fascination that the Hope Chamber of Commerce had been keen to exploit. In the case of First Blood the location for every single scene in the film has now been located and mapped http://www.firstbloodfilminglocations.com/ with the authors make extensive use of Google maps. However it is also possible to visit many of these locations in Street View.

The question is whether tracking and visiting locations virtually, where they are accessible, would allow the fan to experience a similar sense of mythic closure. Recently I have been visiting the landscape around Metato near Pisa on Street View to try and determine the location of the Disiplinary Training Center where Ezra Pound was incarcerated in a steel cage after the war. In the Cantos he wrote there, Pound is continually shifting between the real landscape and the world of his poetic odyssey (via Confucius - and perhaps an edition of National Geographic http://nq.oxfordjournals.org/content/early/2013/04/09/notesj.gjt030.extract.jpg). For instance a distant peak is conflated with the Chinese Mt Taishan, one Hugh Kenner provides a tantalising photo of that he claims to identify from the others in the range, an image that looks like a Chinese painting.

The symbolic landscape entwines with the real in a reciprocal relationship investing it with meaning and drawing meaning from it. The temptation is to think that at any moment a portal might open up between the two allowing the reader more intimate access, whether it be film, poetry or history. In the case of Pound the landscape is so locked in to the poetry that any attempt to enter it from the real world seems futile (and I was warned by a writer on Pound not to attempt it), but perhaps this is true for all of these fictive locations. How much closer to Homer did Schliemann get by adorning his wife with jewels found at Hisarlik?

Through my virtual journeys I was able to discover that a photo of the site published on their Facebook page was in the wrong place and to get a good idea of the spot from where they took their photo. 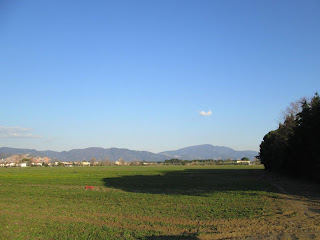 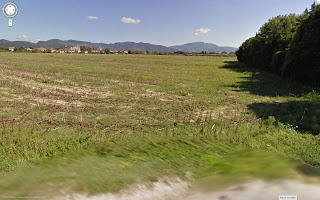 Visiting Hope in Street View at the time of writing the 'bridge to Portland' is still standing beside the one that has replaced it, though it has in fact been dismantled since the Google car recorded it (with souvenir parts available to buy). 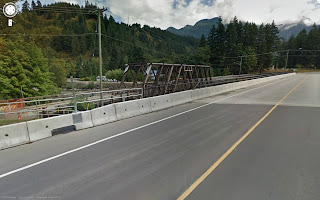 I didn't visit this log at the time though we must have driven past it entering the town... 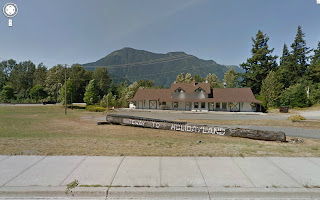 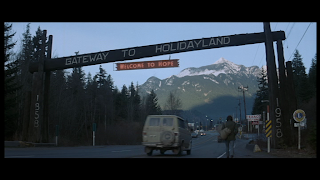 Street View itself is a kind of parallel world around which narratives have been multiplying. Through the convergence of mapping and communication technologies and portable interfaces the virtual digital world will be increasingly layered onto the real world. Permanent immersion in this consensual corporate construct will supplant reality to such an extent that the real world will appear to be virtual and our actions within it will be as those of avatars within a video game or Second Life. Only the bold or the mad will enter this unknowable domain unplugged.

Meanwhile perhaps film studios will make virtual tours of the sets in Avatar and Toy story available - if they haven't done so already in video games.

The GPS computer on my bicycle enables me to record the training journeys I make and to upload the data onto the Garmin website. I can then review my journey as a film watching a pointer trace the route simultaneously on a map and graphs that show the elevation and speed at any given point. After the very real exertion of the ride this replay enjoyed from the comfort of a computer chair is a permanently retrievable record of the event that only being photographed by a Street View camera (while wearing a cycle helmet cam that recorded the car) would make more fulfilling.
Posted by 50° 4′ 7″ N, 5° 42′ 58″ W-58° 38′ 24″ N, 3° 4′ 12″ W at 13:26